I was going to keep it a secret, but…

…I am being forced to spread the word that I am opening a store…hopefully, that is! My plan was to keep the store opening a secret until I knew for sure where and when it was going to happen, but political issues are forcing me to drum up support and statements to present to the Glendora City Council, who has recently put a moratorium in place on the opening of new businesses that deal with the re-sale of second hand goods (i.e. pawnships, thrift stores, antique dealers, etc.). In a nutshell, this is the issue:
At the Glendora City Council Meeting on Tuesday, May 24th at 7:00 pm, I will be attending the public hearing in an effort to persuade the City Council to repeal all or part of the moratorium so that I will be extended the opportunity to open a store in Downtown Glendora. (I already have a store front picked out, have signed a letter of intent to lease with the landlord and have improvement plans pending with a contractor!) I am asking that all of my fans and supporters please comment to my blog or on facebook with their opinions on this matter so that I can take it to the council meeting as evidence of opinions for or against this measure. My argument to the City Council will include:
That about sums it up! Comment on your opinion…please, to me or directly to members of the Glendora City Council! Or, email me with questions or feedback at mitchyliz@yahoo.com or even call me (626) 733-6817. I can help clarify the issue if you have any questions. Thanks for your support and all of your reading!
For some VISUAL Interest-check out what I sold this week! 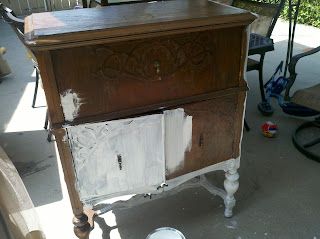 By now, you know that’s not what it looked like when I sold it. I forgot the “before” picture until I already started repairing this great, antique record cabinet. I had to re-build some major chunks out of the wood and sand it down before I could prime and paint it. This was my last big ticket item to sell from my yard sale extravaganza weekend in Morro Bay back in early April.
The Final Product… 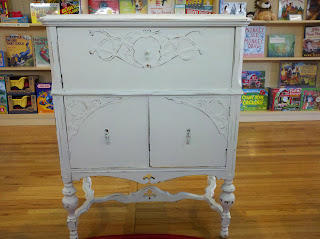 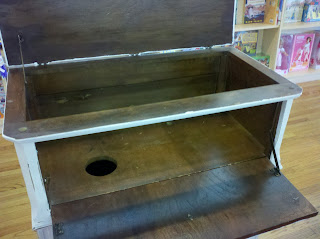 Sold for $165
To a Mom who was redoing her daughters room with fun and unique shabby chic furniture pieces. This was being re-purposed as a dresser with a TV on top. The cabinet that opened from the front as well as the top was the perfect compartment for her DVD player, movies and sound system. The PERFECT alternative to a NEW entertainment center.
On a side note, I sold my GIGANTIC couch this weekend trying to raise money to open a store…ha ha (let’s hope I didn’t sell it in vain)! But, I was left with a challenge to re-furnish my 600 square foot family room without buying anything new and expensive. The result: Six new (but used) furniture pieces for under $75! Wait til you see the before and after pics! It was quite a transformation.