After only one week of “blogging,” I already forgot to make my weekly post. And, I just know that you were sitting at your computers all day Sunday waiting for me to write about my eventful week!

Anyhoo, the lesson learned this week: RESEARCH THE PRODUCT! I’m becoming braver in what I purchase at yard sales to turn around and sell on craigslist. So, this past Saturday (not the 30th but the one before that), I found what I thought was a really nice looking, 17 inch, LCD, flat screen computer monitor. I know nothing about computers, but it looked really nice. So, at a $5 price point (I talked her down from $7) I decided to give it a whirl. In my anxiousness to get it posted right away, I took a quick picture and just guessed at the price, listing it for $20. BAD IDEA! Within the first 14-hours of the post, I received no fewer than 10 call or texts (Keeping in mind that was between 8 pm and 10 am). I went back and raised the price to $35 and was still flooded with texts. I made arrangements with a local guy to come pick it up in the evening (less than 24-hours after I posted it) and even had another guy from Whittier as a back-up. To keep a long story short, guy number 1 tried to talk me down to $30 when he came to pick it up. I said, “so sorry.” Sent him on his way and called guy number two, from Whittier who came right away and picked up the monitor for $35!

I sold the  computer monitor less than 24 hours after I posted it on craigslist! YAY! (Later, when I looked at the price point, I should have posted it for no less than $50…probably even $65 or $70. Oh Well, can’t frown at a 700% profit margin) 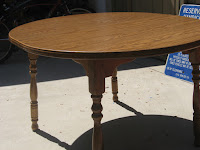 In total, I sold eight pieces of furniture this month, but this week, I FINALLY got rid of a kitchen table that was a major thorn in my side. One of my yard saling mottos is to follow my gut feeling about a “product.” If I hesitate about something, I should just walk away and move on to the next item. But, occasionally I go for it and ALWAYS regret it later! Such was the case with a kitchen table and chair set that I bought for $15 almost two months ago. There wasn’t anything actually wrong with the table, but it was too old fashioned. Oak is out! And, the surface was made of some sort of wood laminate, making it impossible to retrofit correctly. My plan was to paint the entire table white when I had time and raise the price point to around $75. Having never gotten around to it, I sold it for $30 and got the monstrosity of a table out of the garage! So, it was a win-win for all involved.

So, say prayers for a beautiful, rain-free weekend so that I can up my inventory in November!