I’ve been striving every month to reach the $400 mark with my craigs list sales. I figure, that’s about $100 per week and only $25-$40 of actual cash out for inventory (sometimes less). This month, however with my new-found interest in ebay and some nice “high dollar” furniture items, I pulled in $985! Interestingly enough, though it’s been the small stuff that has gotten me to that $1,000 mark…well, almost.
Some hot items of the week: 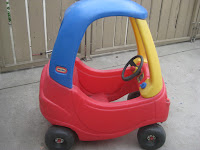 Little Tikes Cozy Coupe
Purchased for $3 (Original asking price: $5)
Sold for $20 (in less than 24 hours)
The lady that bought this drove all the way out from Palmdale to pick it up. That’s a 70+ mile drive. When you think about the cost of gas, was it really worth it? It was for me! 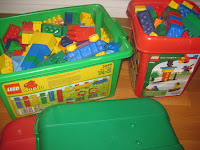 Lego Duplos
Purchased for $1 (Original asking price: $3)
Sold for $15 (Sold these in less than a week) 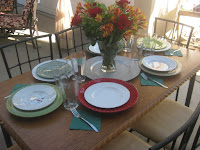 7-Piece Kitchen Set
Purchased for $25 (Original asking price: $40)
Sold for $110
I bought this about 3 or 4 weeks ago, but needed extra seating for a party at my house so pulled out the table and chairs and used it outside. I re-took the pictures with the table “staged,” and I ended up selling it two days later. I’m not sure if that helped, but it certainly didn’t hurt.
The $99 Jacket 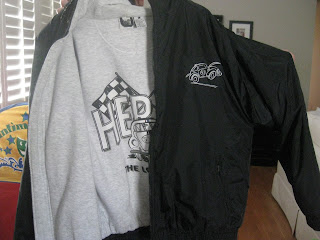 Ebay has opened a whole new world of purging in our household this month! With my success in selling off smaller items, Jerry was inspired to go through his closet so that I could sell some of his old clothes. In the very back, he pulled out an old Herbie, Love Bug jacket that he has had for over 10 years. It’s a nice jacket, in great shape that just doesn’t get worn anymore. So, I posted it on ebay with a starting bid of $2.99 and $9.00 shipping. My thought is that if I sold it in a yard sale, at most I would get 2 or 3 bucks. The jacket sat for 6 days with no bids. Then, finally on the last day, 5 hours before the end of auction, I checked my status and it was up to $20.50. I was pretty excited about that! Three hours later, I checked my ebay status again and the jacket was up to $32 with only one hour left in the auction. With 10 minutes left in the auction, Jerry and I were glued to the computer as we watched two people duking it out in a bidding war! With one minute left in the auction, the bid went from $86.50 to $99! Not only that, but the winning bidder was a guy from Japan who forked over an additional $22 for shipping. All that for a $2 yard sale jacket in the back of the closet! We celebrated that night with a fresh donut from the Donut Man! yummy! 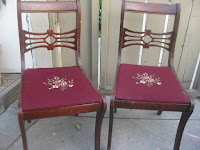 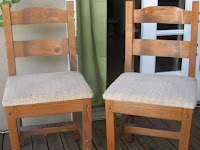 Pair of Kitchen/Dining Chairs
$0 (Purchased with a kitchen table-all for $15. I already sold the table for $35, so this sale was pure profit)
Sold for $25