It’s ironic. The biggest reason that I opened a store was because I ran out of space in my garage to keep my finished and unfinished pieces of furniture. Now that I have a store, I still don’t have any room to store things. Partly because I have so much but also because it isn’t organized effectively. Since I have run out of storage in my garage, things overflow onto my covered deck and underneath my gazebo. It’s not ideal, but it works for now. That is, until we have an abnormal California windstorm.
I’m certainly not one to freak out about the weather. But, today I was afraid to look outside when I woke up. I wouldn’t have been surprised if a dresser had flown over the wall into my neighbors yard. The wind ripped the bolts out of my gazebo and it was partially collapsed on the ground about eight feet from where it normally stands. And the rest of the furniture traveled a bit here and there, but there was no major damage…and no flying dressers thank goodness.
Since the power was out downtown and everyone else closed shop, I closed the store too and spent my windy day in the wind trying to sort the mess. Actually, as of right now, I’m just taking a break from the mess I’ve created because I’m sick of getting blown around. With the winds expected to get worse, I will prevail!
Here is a view of my “workshop” (if you dare). 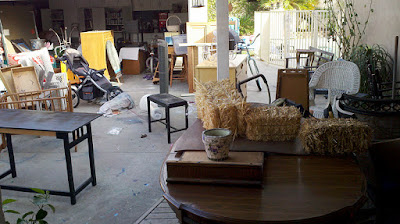 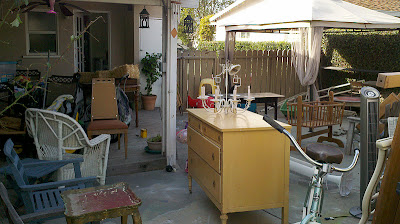 We managed to wedge the gazebo in the corner so it was supported by the gate and wall.
And, there’s some pieces ready for the store as soon as some space is freed up…like that awesome yellow dresser and the black writing desk in the top picture.
In the meantime, I’m finding all kinds of treasures to post on craigslist as I sort through the boxes of stuff in the garage.
Wish me luck. Hopefully I won’t fly away as I try to find space for everything!