Better than the Westin! Master Bedroom Makeover for under $200

In the six years that we’ve lived in our house, one of the only two rooms that we haven’t touched was my master bedroom. 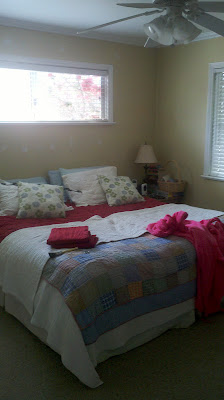 I liked the paint color that was already in there and the existing carpet was in pretty good shape. So, we just went with it. 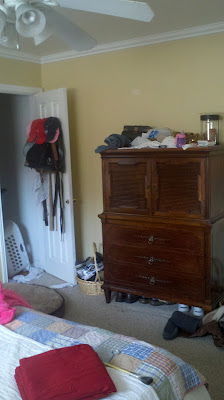 Nice of me to straighten things up for pictures, huh? Just keeping it real!

In these before pics, I had already stripped the walls of decorations and took curtains down, so it looks particularly gnarly!

It’s taken me a very long time to get started on this project because I didn’t have a jumping off point. That is, until the end of February when I nabbed a complete French style bedroom set. 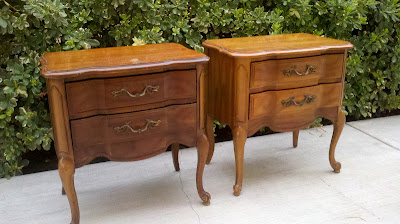 These two nightstands came with a coordinating dresser and mirror. They screamed “STORE!” But, then I started giving it more thought and decided that they would work really well to replace my existing furniture (which was from Target, by the way…I know…pathetic for a furniture restorer).

I really don’t like matchy matchy furniture. Coordinating furniture, in my opinion shows a real lack of creativity. But, then again, I thought I could lessen the matchy-matchiness of the set by painting the nightstands a different color than the dresser.

Step 1:
Paint Walls. I used Behr Paint and Primer in a lovely shade of grey, two shades lighter than Annie Sloan Paris Grey. I love Behr paint, but have never used their paint and primer combo and it worked awesome. My entire room only took one coat of paint!

Step 2:
Remove Carpet. I asked my hubby when he would be able to take the carpet out for me. He said May 20th (to be fair, he takes the comps for his Masters Degree on May 19th so I couldn’t really ask him to take a reprieve from his writing to humor my silly re-decorating whims). That wasn’t gonna work for me though. Last Tuesday, I stood in the middle of my room and was thinking, “I could totally do this! I don’t need him to take out the carpet.” And that’s exactly what I did. I moved all the furniture out. Disassembled my king size bed and starting ripping it out. The hardest part was getting the bed over the gigantic roll of carpet. 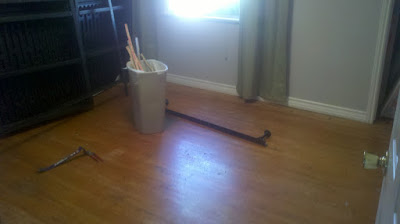 Who needs a man, anyway!? Okay, okay. I do! I never want to do that again. It was totally mans work! But, I got it all up and out of the house…by myself. In just an hour!
Step 3:
Refinish furniture. This is all I did last week. It seemed like took for.ever. I got nothing done for the shop because I was so focused on getting my bedroom furniture repainted!
Step 4:
Put it all together!
Before﻿ 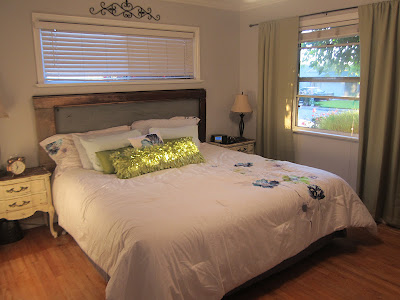 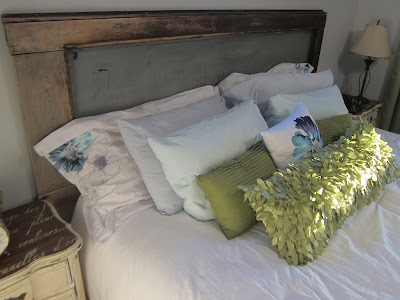 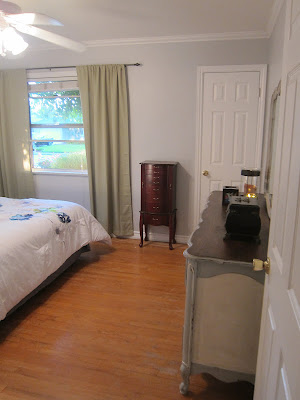 Wondering how I did this for under $200?

I got the dresser and nightstands at a garage sale for $60! It was a killer deal and every piece had all of the original hardware intact! 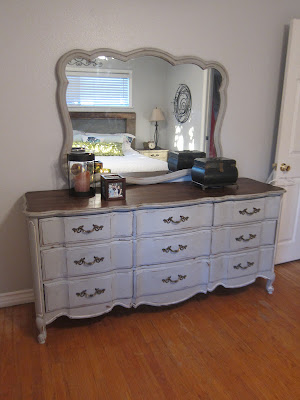 I painted the dresser in Paris Grey with Old White accents in the detailing around the legs and on the side and I stripped the top and re-stained it with a dark walnut finish. The entire piece has a coat of dark wax. 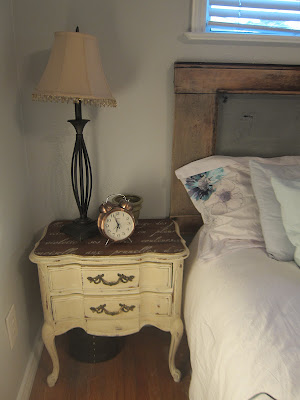 The nightstands are painted in Old White with dark wax and the top was stripped and re-stained with a mixture of Mission Oak and Dark Walnut. I used a large stencil (thanks to Debbie at ’round the coop for the loaner) on the top of both nightstands! 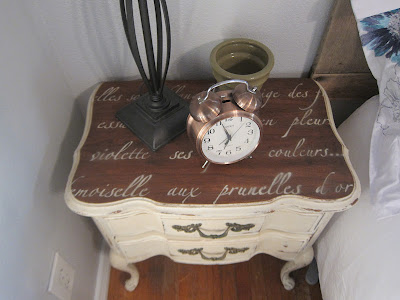 The headboard is one of my favorite new additions and it didn’t cost me a dime. 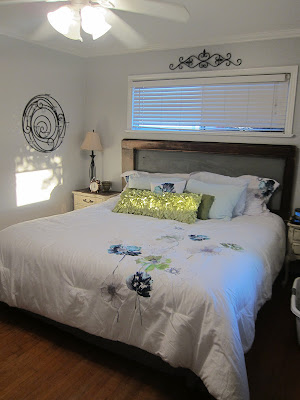 For years, it has been propped up against a wall at Blue Chair Children’s Bookstore with stuffed animals, bows or other children’s items hanging from it. I’ve always wanted it but it’s never been for sale…until recently. Grandma Laurie at Blue Chair traded the antique screen door for a whole bunch of new hardware for some projects that she was working on! SCORE! 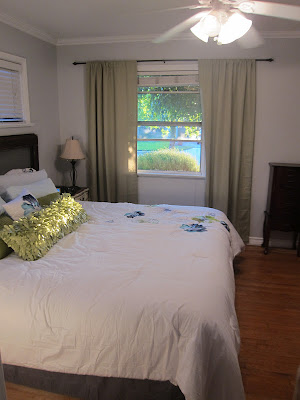 The comforter set was the most expensive part of the new room at $79.99 for one of those bed in a bag sets from Home Goods. It came with the two shams and three throw pillows. I splurged on the fluffy green pillow, which was $16. 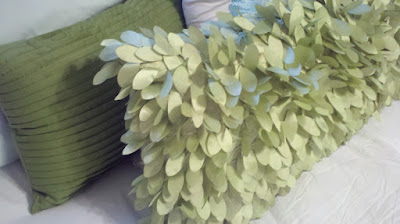 The lime green curtains were a set that I already had from my stash. I just moved them to the other window so that the headboard and nightstands were the focal point on the south wall of the room.
And all of the accessories were already in my room, I just moved them around to different walls. I still have some more accessorizing to do…but all in good time.
Figuring I used about $10 worth of Annie Sloan paint for the furniture, the total cost of the entire room was $198.00. Not a bad investment for a space that I spend a lot of time in and strive for comfort, elegance and style!
I love it. Better than the Westin!
﻿